Ryan Rose fucks Scott Riley in missionary position until he can’t hold back any longer!……

Falcon Studios says: As Scott Riley approaches the pool, Ryan Rose lifts his sunglasses to get a better look at Scott’s perky butt. As Scott swims back and forth in the cool, refreshing waters, Ryan rises from his chair and wades into the pool too.

They kiss again passionately, and then Ryan leads Scott to the edge of the pool for more. Using his hand against the back of Scott’s head, Ryan guides Scott up and down the length of his shaft. Thick trails of spit roll down Ryan’s shaft as Scott swallows Ryan’s meat to the base.

Scott stand up in front of Ryan and Ryan pulls down Scott’s suit. With Scott bent over the lounge chair, Ryan spread’s Scott’s fuzzy blond butt cheeks and rims his tight, pink hole. Eager for more, Ryan mounts Scott from behind and fucks him doggy style.

They move to a sit fuck, and Scott’s ass stretches around Ryan’s huge cock. Using his muscular legs, Scott raises and lowers himself on Ryan’s massive tool. Flipping Scott over, Ryan fucks him in missionary position until he can’t hold back any longer. 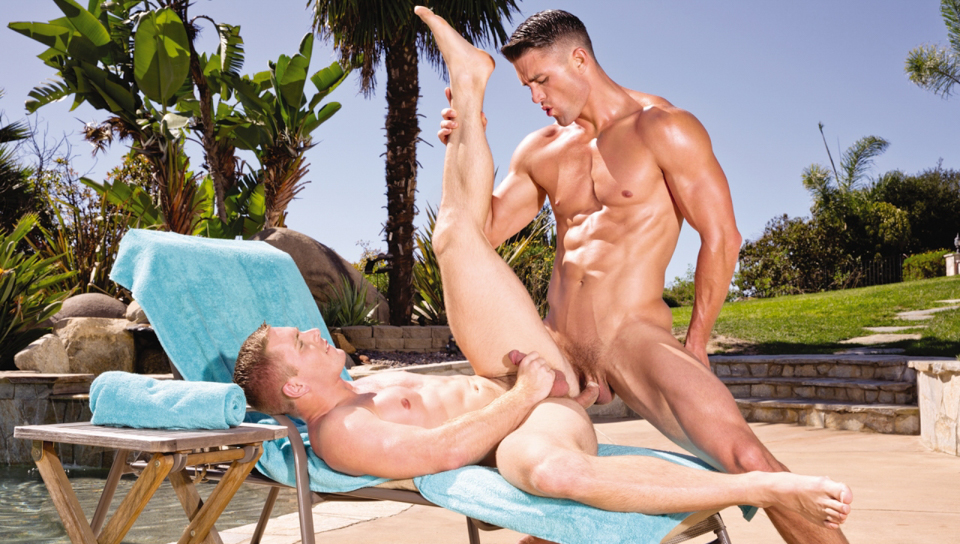