Next Door Buddies says: Unaware that his brother had company over the night before, Spencer Laval is just a man trying to eat his breakfast in peace and quiet, but when Marcus Tresor finds him in the kitchen, standing alone with his morning wood raging, things become a little awkward.

Marcus tells Spencer he’s not really into cold cereal, and instead prefers a little breakfast sausage, eyeing the bulge in Spencer’s shorts. Spencer tries to play it off, but Marcus persists, and before he knows it, Marcus is gripping his cock and staring him dead in the eyes.

Spencer’s mind is telling him to walk away, but his throbbing cock is telling him something else entirely, and when Marcus flips Spencer’s waistband down and begins to suck him off, Spencer realizes there are worst ways to spend the morning.

Suddenly, Spencer’s hunger is no longer in his stomach, as his cock gets rock hard in Marcus’ mouth. He bends Marcus over the island and plunges his raw cock deep inside Marcus’ hole. Marcus proves this isn’t his first-morning sausage, as he takes every inch of Spencer’s dick willingly, fucking him all over the kitchen.

They clean up just as Spencer’s brother stirs awake upstairs. 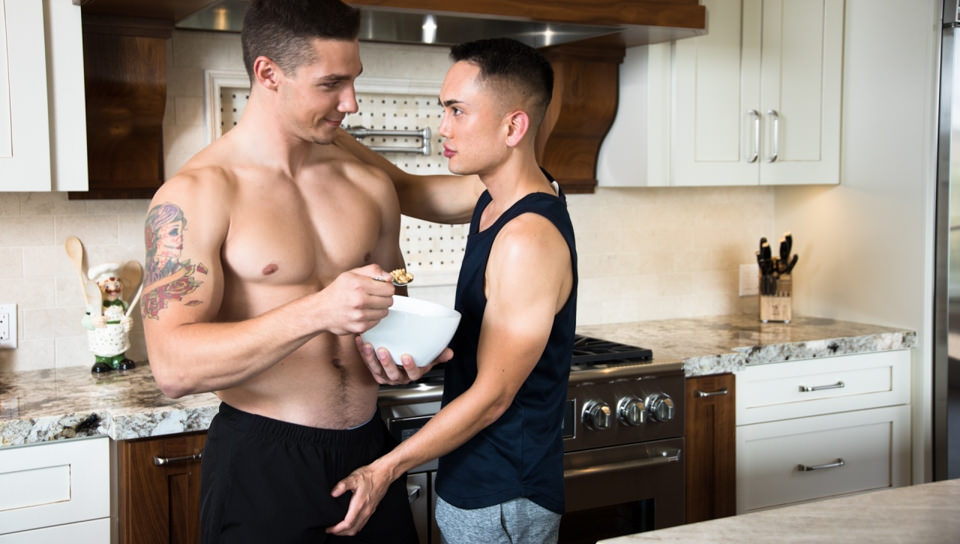 All the Next Door Buddies updates right here!

What others are sharing just now: